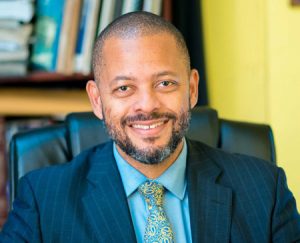 Consumers now have a new avenue through which they can report service providers and businesses that foist inferior products and poor quality services on them.
This can now be done through a new website (www.ccac.gov.gy) that the Competition and Consumer Affairs Commission (CCAC) launched yesterday at the Herdmanston Lodge, in Georgetown.
Present at the launch was Communications Officer Allison Parker, Executive Director Dawn Cush, and Chairman of the CCAC Board Ronald Burch-Smith.
Executive Director Cush told those gathered that the website is an important tool that advances consumers’ knowledge on their rights and provides information on any agency or business. The user-friendly website will also allow consumers to file reports using the online complaint form, the Director said.
CCAC Board Chairman, Burch-Smith, who also addressed the media, said that the Consumer Affairs Commission remained concerned that consumers are not properly represented within the law.
“More important than the shortfall, in our adjudicative powers, is the level of ignorance that exists about persons’ rights and obligations under the legislation. Too many service providers run away from their legal obligation”, he said.
In the absence of a more comprehensive legislation, “too many scarce resources are wasted by consumers on replacing goods that in a healthier and informed consumer rights environment would not be offered for sale in the first place”, the Board Chairman added.
The Board Chairman said that the launching of the website is part of the Commission’s broader objective of embracing digital technology in the 21st century. With the operationalising of the website, the Commission has transferred power to consumers as it encourages boldness over caution in allowing more persons to participate in filing complaints online rather than visiting its office