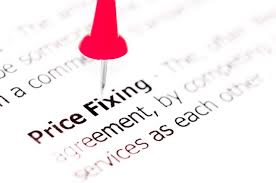 The Shipping Association of Guyana (SAG) has been found guilty of “price fixing” by the Competition and Consumer Affairs Commission (CCAC) and five of its members have been ordered to pay $3.8 million each.

In a press statement yesterday the CCAC explain-ed that its commissioners “unanimously” found that the SAG was engaging in anti-competitive behaviour by agreeing to collude to fix rates for the haulage of containers from terminals operated by its membership, with the intention of disrupting the natural market flow to the advantage of the SAG.

“The terminals have been made to pay. If they don’t pay there could be some repercussion so they’ll be engaging an attorney. We are supportive of that approach. There is a timeline of I think 21 days to file an appeal,” Sears said.

He noted that the judgment against the five terminals includes a payment of $3.8 million each but it is not clear to whom this payment is to be made.

‘There nothing which stated who the payment is made out to. We are trying to seek some clarity which is why the terminals have decided to engage legal representation to appeal,” the chairman noted.

The Commission in its findings stated “we are satisfied that the 15th July decision of the Shipping Association and adopted by the 5 terminal operators was an agreement within the meaning of Section 20 of the Consumer Affairs Act.  It distorted a competitive environment among terminals for services provided by them to consumers generally, that is to the shipping lines and agents, importers of goods and any person or entity which had the option to exercise choice or influence where their goods were shipped. The private haulers had little choice in this matter, but by imposing the agreed rate on private haulers in a concerted manner distorted competition and gave themselves an unfair and unlawfully implemented advantage.”

The Commission also ruled that SAG members with immediate effect terminate the price fixing arrangement  which is reflected in SAG’s memorandum of 15 July, 2017. Each of the five terminal operators was ordered to pay the sum of $3,843,000 within six weeks of the date of the order.

Meanwhile, Jaikarran is happy about the ruling though he is not sure of what impact it will have.

“I’m elated. I’m not sure of the weight the committee has but I’m thankful they heard us. This decision is good for small businesses because if implemented we’ll be able to make money as independent companies and not be forced to sub-contract with members of SAG,” he told Stabroek News in an invited comment.

He stressed that the wharf operators had been operating as a ‘cartel’ with the SAG as their puppet.

“It was an unjust situation where they were bullying small business,” the business owner said.

According to Jaikarran the members of SAG had previously required customers to pay the wharf rather than the transporters.

“My customers paid the entire amount at the wharf and they took out 15% for handling and gave us the 85% but in April 2017 they started charging a handling fee of $7,000 on 20 ft haulage and $9,000 on 40 ft haulage which the customers have to pay if they use our services. They claim that the handling fee was inbuilt if they used SAG members so persons were not using our services. We were not making any money,” he lamented.

The matter was heard by the Commission which includes Chairman Ronald Burch-Smith and members Rosalie Robertson, SC and Pradeepa Bholanath.